We have countless written testimonials from patients who are happy we have have helped them to a successful outcome. Here are just a few: 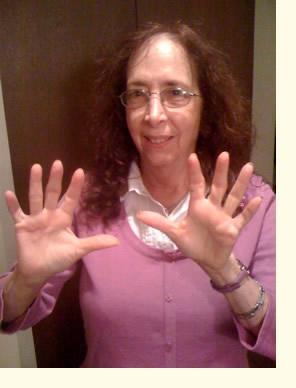 Teacher Does Her Homework Before Surgery

My name is Sybil Gabay and I am a 64 year-old teacher of special education in the Philadelphia School District. I had Dupuytren's Contracture for five years. It began as a lump in both palms and progressed to having four fingers severely affected on the right hand and three fingers on the left hand. I could no longer open either pinkie finger or straighten any of the fingers that were affected.

I saw three hand surgeons over the course of the five years. All recommended hand surgery with extensive physical therapy following anticipated the four-hour operation, which included skin grafting on the right hand.

I began doing research on alternative methods of correcting Dupuytren's Contracture. After many hours of researching, I decided that needle aponeurotomy was the procedure I wanted to undergo. I found the web site for Central Jersey Hand Surgery Office, and I made an appointment for a consultation with Dr. Teddy Atik.

Prior to this, only one surgeon I had seen had heard of needle aponeurotomy, and that doctor said my fingers were too severe for the NA procedure. Dr. Atik did not agree. He said that he could perform NA on my right hand first and then the left. He thorougly explained the procedure, and the outcome he expected to achieve, and I was ready to go. The next day I was off to Tom's River Physicians' Surgicenter for my procedure.

The entire procedure took 1 1/2 hours. I was able to watch my fingers be released and my hand return to normal. Only the pinkie remained a little flexed, but Dr. Atik had told me about the pip joint and the results I could expect. I was overjoyed to have my hands back. At the end of the procedure I wore a splint that I had to wear at night for four weeks. All I could do was stare at my hand on the long ride home in wonderment.

I could drive my gearshift car and resume normal activities the very next day. Any pain was taken care of with Advil. No physical therapy, no major pain, no bandages, and no limited activities. It was a miracle.

Being a teacher, I use my fingers for reading sounds and math activities and now my students wouldn't have to wonder why I had "bent hands." They were very excited when they returned in September and were anticipating my other hand "being straight."

I returned to have my hand examined by Dr. Atik 13 days later, and I made an appointment for my left hand. On September 10 I had the left hand done. The outcome was as spectacular as the right hand has been. Now I have two straight fingered hands. I can hug my grandson without clawing him with my pinkie, do my nails, teach with my fingers, shake hands, and wash my face. Everything I couldn't do before.

I wish others could be given the opportunity to explore NA and it's phenomenal results before they decide to have standard surgery with its extensive recovery time.I would like to thank A Gary M. Pess, MD and his staff, and the staff of the Central Jersey Hand Hospital for a life-changing experience.

I have lived with the misery of Carpal Tunnel Syndrome for over 25 years. This has not only made day-to-day living uncomfortable, but as a professional drummer, my music has suffered from numb hands and even pain. The condition made it impossible for me to enjoy my drumming and I would have to look down at my numb hands to make sure I was holding my sticks so they wouldn't fall out. Drum solos were out of the question.

Since Dr. Pess worked on my left and then my right hand, I have not only been able to play normally, but I am doing drum fills and solos that I could not have done before! It's like removing the condition has opened up my creative abilities. This has not only surprised me, but the professional musicians I work with are amazed as well.

Words cannot express my gratitude for the service that Dr Pess has provided me. I wish him continued success and countless blessings. He has provided me with a new chapter in my life.